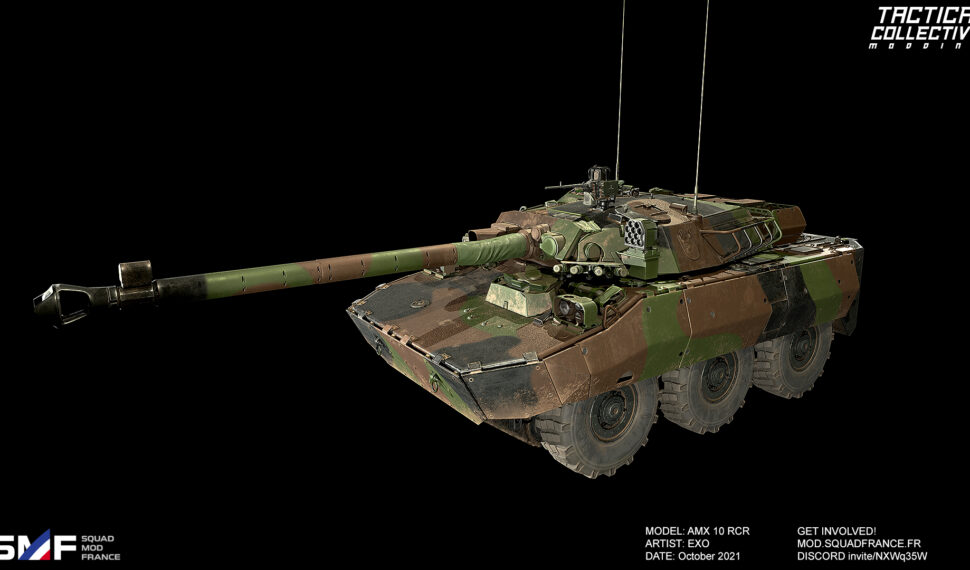 As you can see we have been working like crazy on the French Faction mod and our different projects. The Tactical Collective team has started working on an African mod with three new factions, so that our little French soldiers won’t feel alone on the battlefield. We also have Springbok, creator of the South African Border War mod, and Bigyes, creator of the Middle East Escalation mod, who have joined us. This will allow us to pool our creative abilities for the benefit of the Squad community!
You can find all the links at the end of the WIP.

AMX 10 RCR and SEPAR by Exo

Exo presents the AMX 10 RCR SEPAR Highpoly, an over-armored version of the AMX 10 RCR reconnaissance vehicle,and the progress on the texture of the AMX 10 RCR.We will be integrating the same features as our old model present on the Jensen’s range, a fast vehicle with a big firepower that we hope will bring some freshness to the vehicle gameplay in Squad.

BORIS has finished our first version of the Light Armored Vehicle, with the AANF1 machine gun.

The following versions like the Milan are already being modeled. A longer version, the VBLL, will also appear.

JO_CMD has continued his work on improving our character, adding new faces and custom equipment. We will try in the next updates a first test integration to see if the model behaves well in game.

To add a little more realism to the French Faction, a retexture of the Bandage was made by UnPoneyMagique.

FRENCH ARMY US SHOVEL by UnPoneyMagique

Poney is in charge of modeling this shovel that all French soldiers have had in their hands one day.

HAL9000 validates its recruitment at Tactical Collective with this first model that will complete the inventory of the 2020 Faction.

WI_X0 gives us a hand on the animations and it’s not a refusal!He signs here the realization of the animation of the grenade launcher HK, which will allow us to gain in visual quality on the mod.

You dreamed about it, Drakoliche did it. Here are the last two versions of the Famas that will complete the arsenal of the 2010 faction.We also plan to model the FIL/FIR scope so if you have it at hand don’t hesitate to contact Marquis in private.

Pony has finished the texture of the night vision scope which I remind you can be installed on the FRF2 or the Famas.We have a long term vision of the faction and we reserve the opportunity to one day maybe have the faction equipped for night combat.

Here is the new army semi-automatic sniper rifle modeled by Joe with his Schmidt & Bender PM 2 short scope that will complement the HK417 for the 2020 faction. There is still some work to do on it but you can already admire the quality of his work.

The Eryx anti-tank missile made by JO_CMD is planned to replace our AT4CS, which will become a light anti-tank.

We hope to be able to integrate this weapon, which has a wire-guided missile with a range of 600 meters, as close as possible to reality. A future challenge for our integrators!

The PGM Hecate 2 made by Titoonet will replace the FRF2 in the Sniper role which will become a Marksman with the Hk-417.We let you admire the quality of the model and these sublime textures.

You have probably already tried or seen the MAG58 machine gun mount of the CAÏMAN in game, here is the rendering made by Joe.Quite a piece of goldsmithing !

Different trailers have been made by Poney to add immersion in French bases on Squad maps.

A complete redesign of the GBC 180 was necessary, and it’s JO_CMD who took care of it perfectly!A lot of work on the optimization, the addition of details especially in the cabin and new textures allow the model to exploit its full potential. We hope you’ll like it.

AMX LECLERC by Hcardioid and Raphy

Here is the big cherry on the cake, the long awaited Leclerc tank !With a realization of the model close to perfection by Hcardioid and an integration all in smoothness by Raphy, this symbol of the French army should be available shortly.

The French Faction mod contains both 2010 and 2020 versions of the French Army. Both are playable on Jensen’s Range and on various layers.

As usual, we will keep you informed about updates and our overall progress. Please have patience for we are as enthusiastic at the prospect of improving this faction as you are but do not forget that we work on this mod in our free time.
Thanks for supporting us and our work.