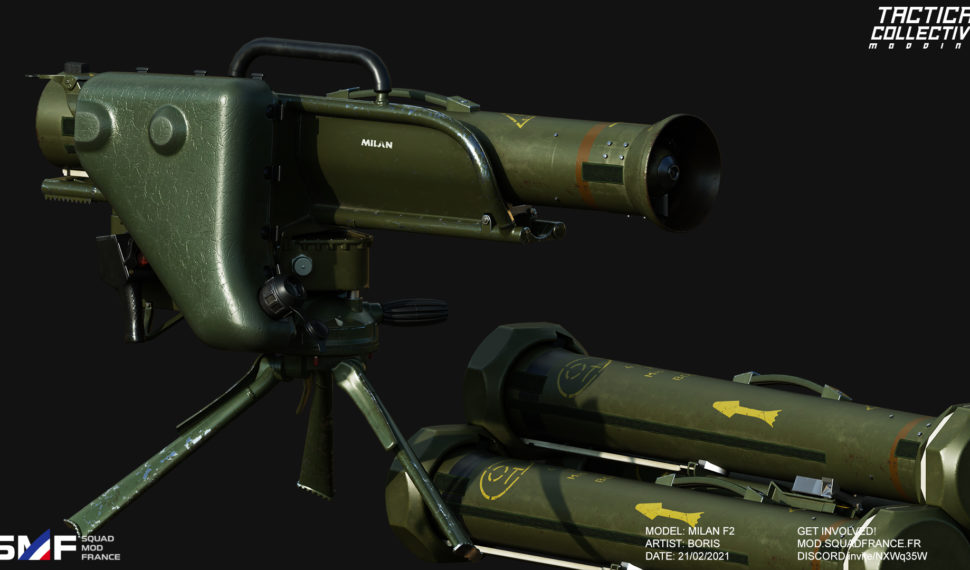 As you know, the V2 version of Squad was released recently. It has been a long wait for us the mod dev team as this update represented a minor setback in the completion of our work, rest assured however that we keep on working!

In our current state of progress, we are fixing bugs for playability’s sake. The French faction and the Malian map (Douentza) are accessible on V2, we are aiming for an internal playtest within the month of March.

As soon as the mod’s playability is deemed valid, we shall make it accessible to the public.

For this 29th WIP, let us introduce you to what we have done so far!

Let us start with the MILAN ATGM, made by BORIS. Since WIP 28, he improved the weapon’s model by adding texture. We think it is quite the beauty, don’t you?

Thanks to Joemefirst’s work, an underslung 40 mm Grenade Launcher has been added to the HK 416 FS. As you can see we plan to have it with a buttstock also.
So far, we already love it!

Due to the FAMAS needing a complete overhaul, the animations had to be reworked by our 3D animator JabbingJipson. Looking smooth though, don’t you think?

Here is the full compilation of French voiceovers you will hear ingame. A many thanks to Matthew Vanston, the voice actor who recorded the lines for us, and to Otha for the sound engineering. Please note that the voice lines in this video are in their clean version (without SFX).

UnPoneyMagique worked on the unit icons so that each one of them is representative of the French army’s units. Each of these units is built differently and isn’t equipped with the same gear.

We are replacing our old binocular model with the Angenieux 8×30 made by one of our soon-to-be newest recruits Pinwheel.

This is a scope variant for the HK417 (X1.5 X6 (dual zoom)), made by our second soon-to-be recruit Shyro, Pinwheel’s brother.

With the goniometer (magnificently) textured, Exo is reworking the overall mortar model. The older model presented optimization issues and it was easier to just do another one.

Exo is making the model in a way that it can be towable.

There will be two soldier variants in accordance to the different periods featured in this mod (2010 and 2018 eras), along with different equipment and characteristics, all made by JO_CMD (an active paratrooper). We are astonished by the quality of his work and his fast delivery time, he surely went beyond our expectations and we are proud of him.

As usual, we will keep you informed about updates and our overall progress. Please have patience for we are as enthusiastic at the prospect of playing this faction as you are but do not forget that we work on this mod in our free time.

Thanks for supporting us and our work.