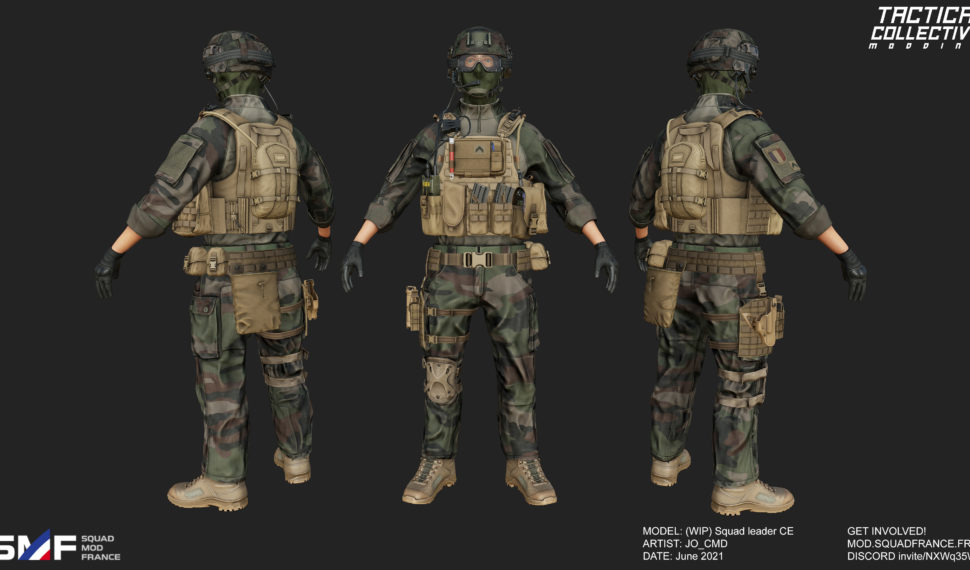 First we would like to thank you for contributing to the pot for JO_CMD’s new PC. Thanks to your help, we managed to get 900€. JO will be able to get his dream 3D PC, you’re the best <3 !

The development of the mod keeps going well and the progress on models is good. We’re working on massive assets right now, as you will see in WIP 31.

After warming up on the 120mm mortar, Exo went all in on the AMX 10 RCR/SEPAR model. Our old model wasn’t up to the mod’s current quality standard and Exo’s been working around the clock for a few weeks to be able to present this new beauty!

After finishing the Leclerc MBT we’re currently integrating ingame, Hcardioid went on to model the PVP or “Petit Véhicule Protégé”. This lightly armored vehicle will bring up to five soldiers to the battlefield.

Since last update, BORIS modelled the inside of the “Véhicule Blindé Léger”, the VBL. This recon vehicle will be declined into different variants : the  VBL 7.62, the VBL 12.7, the VBL Milan and the VBL Long with four seats. We’re very excited about this vehicle as it will be amphibious.

FRENCH SOLDIER by BORIS and JO_CMD

You’ve probably seen the progress on the 2020 version of our french soldier character.

Last month BORIS and JO_CMD worked on rigging the character to the squad skeleton in order to have it working with the Squad animation set. So we’re really close to integrating our custom characters to replace our retextured british placeholders.

The ALPHA 900 helmet magnificently modelled by JO_CMD is joining the kit of the 2010s helicopter pilot.

Because we got better weapon references Drakoliche made a complete rework of the machine gun. The weapon looks really nice and accurate now . We plan to add the 7.62 mm AANF1 in remplacement of the MAG58 for the 2010 Faction.

The Milan launcher modelled by BORIS is being integrated and DanDaMan is taking good care of the animation with the help of KaB.

VOICES by Otha and Matthew

Here are some examples of the last missing voice lines interpreted by our talented Matthew Vanston and mixed by Otha, our sound engineer. Do not hesitate to go to Matthew’s Youtube page you will find all his work on the mod and much more!

The OB-50 is a night vision optic used in the FR-F2, the Minimi and the Famas. We want to add as many possibilities as we can with regard to the equipment and be ready for any evolution of Squad. It’s UnPoneyMagique’s first 3D model realized with the help of other Tactical Collective members.

Eryx is a short-range portable Semi-automatic command to line of sight “SACLOS” based wire-guided anti-tank missile (ATGM) with a operational range of 50-600 meters
The missile uses a tandem-charge HEAT warhead and can be shot from a standup position without a tripod. We have planned to equip our HAT kit with and thus give back the AT4 CS to the LAT kit. Targeting optimization for rifle grenades is also planned.

Titoonet is presenting us the PGM Hecate 2, a long range precision rifle chambered in .50BMG (12.7mm), used by snipers in the french army. The rifle is equipped with a Scrome J10 (x10 zoom) scope that will allow shots from 500 to 1800 meters. We are thinking of a few ideas to balance this rifle ingame, for example reduce standing accuracy a lot, low ammo or a lack of short range ranging options on the scope.

There was a need for a mount for the MAG58 in the NH90 so Joe took care of its modelisation. Once it’s done we will be ready tho add the NH90 ingame for the 2020 faction.

Boris painted a new camo livery for the PUMA in order to make it harder to spot in forest biomes.

BioHog finalized the 81mm mortar by modeling the Scrome GP2M goniometer. It will allow the french faction to have two types of mortar, this 81mm and the 120mm one.

Medinar went on to integrate the 81mm mortar with a high level of detail, not unlike the 120mm mortar. He also took the time to rework the shooting distance of the MO120 RTF1 mortar that will now reach 3km while the MO81 LLR will be similar to already existing Squad mortars.

Alexis keeps working on the adaptations of his Tigre, with an optimization pass in the cockpit and the addition of a long distance radio antenna. Next on his list is additional armor for the pilots, sand filters around the air intakes and the addition of hellfire missiles.

The French Faction mod contains both 2010 and 2020 versions of the French Army. Both are playable on Jensen’s Range and on various layers.

As usual, we will keep you informed about updates and our overall progress. Please have patience for we are as enthusiastic at the prospect of improving this faction as you are but do not forget that we work on this mod in our free time.

Thanks for supporting us and our work.