Work In Progress #15 and Interview of Legion (Mapper) 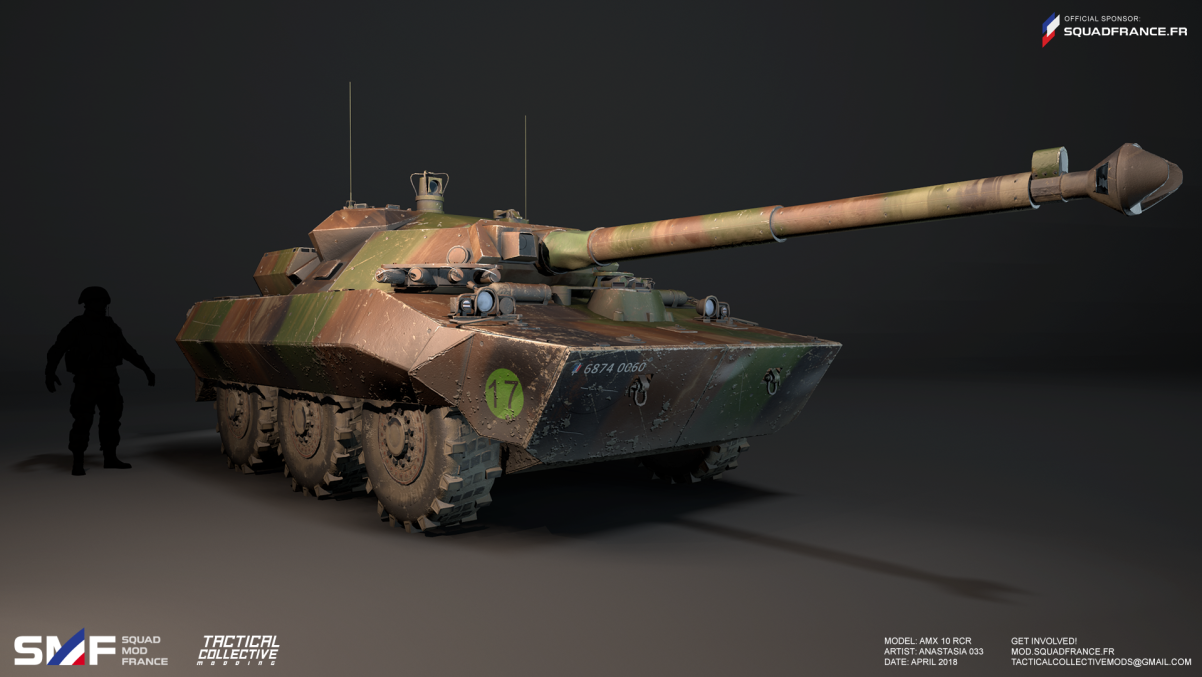 For this month’s WIP, we are pleased to present a much awaited item! She’s done an absolutely amazing job, and finally, here it is: This next model is progressing fast, and we’re hoping to have it textured and in game for next time!

This vehicle is the main transport truck of the French Army, and depending on the map and game mode it will be playable alongside the completed TRM 2000 for logistics and troop transport. Take your time to observe the quality of the details! Cracking work by Lobstrex. It’s been a while since we last showed you the progress on the HK, but she’s still in the works and is progressing nicely. This weapon will function as the marksman rifle for the faction. Vic is doing a fabulous job. Before recovering the HK417, Vic was playing around with props, and his last creation is a nice Foreign Legion Kepi, dedicated to decorating the map with foreign legion references: The white one is the famous cap of enlisted legionnaires, well known all over the world. The black one, is for NCO’s and Officers. On the front is the ‘Grenade’, a symbol of the Foreign Legion.

Don’t forget that our map is also in construction, and some props and buildings are especially made for it. Some of them seem to be simple, but they contribute to the immersion and are vital to replicate a true Malian environment. You can find water wells almost everywhere within desert communities. And this is typically the kind of well which stand in Mali.

You will see this piece on the map soon.

Didish joined the Tactical Collective modding team quite recently, and his first model is already a marvel. After teasing you with this High Poly today, we are already excited to show off the final render with textures for next time. Then Didish will take care of the French character, and French soldiers will start fighting on Squad’s maps. That’s it for this month, but we’ll be back next time with more goodies!

See you next time!

His map throned in the most populars of Steam Workshop for weeks, his work is followed by more than 1800 people through the Squad’s Community, and we are honored to count him among us. Today we highlight our level designer leader, Legion.

Legion, can you introduce yourself to the readers ? Your life, your professional situation and how did you start to make maps for game ?

Hi there, my name is Andreas. I’m italian, but i live and grew up in Germany. Currently i am studying business informatics.

Doing sandbox/creative stuff in games always interested me. This started way back in games like Stronghold Crusader and Empire Earth, where you could build your own levels with their editor. What got me into more complex editors where games like Far Cry, there i started to build a lot of maps, just for fun. The settings felt so great. I enjoyed it as much as playing the game itself. Then after a break i got into Unreal Engine 3 through playing Rising Storm/Red Orchestra 2. Looking at all those great maps made by the community, made me want to do a custom map too. After a while watching the Squad development and seeing what people where working on in the Wrench, got my interest, but i wasn’t sure if i wanted to learn a new Engine. But thanks to Axton’s tutorials I slowly started to test around with the SDK. My first map for squad was a hill/mountain area, but after some time it felt too big and most zones where ugly and out of place. So i started a new one : Samland Peninsula.

So your last map made for Squad is Samland Peninsula. How do initiate that kind of huge project like create an entire map ?

Well you need an idea of the terrain or place your map is located. Is it a mountain area ? Or maybe a nice little place in France ? You start to make a sketch in your head or on a piece of paper. Do I want a little river on my map or maybe a big stream ? Where should i place the roads ? Which approach should players take ? How many towns or villages do i want ? Between the cap zones, you will need to place some point of interest to fill the gaps. It can start from an abbandoned barn or maybe a swamp. Also a question that every mapper has is, do I want to have a unique place on my map ? Maybe an underground bunker ?

After collecting all those ideas you start with mapping. The idea was to have a peninsula where the defenders get pushed back and the frontline keeps getting smaller and smaller until you have to make your last stand (or start swimming). By looking at the baltic sea coastline, I landed in Kaliningrad and there i found a cape, an airfield and it was russian. Everything connected so well and boom, Samland Peninsula was born.

Can you describe the different stages of level design ? From the very beginning to the end, which is the final publication on the Steam Workshop, and the time needed.

A lot of steps are needed and you spend most of your time testing and correcting stuff at the start. Where is the start ? Well the start is your heightmap, it gives your map that unique shape of hills and valleys. Scultping your terrain by hand doesn’t give you the same roughness.

After you got your heightmap you start picking your ground textures and do a lot of testing. Is the grass too bright ? Do i like the look of it ? What time of the day should it be on my map ? Oh wait, i need also some gravle for the roads and i want some other textures in rivers etc. So this is an important one, it can give you headaches sometimes.

After you got all your ground textures you want to use, you go for the foliage. Different grass types, bushes, flowers, tree stumps, rocks….an endless list of stuff you throw into your map. But thats the point where it starts to live.

That was the start, now the time-consuming part kicks in. The next step is setting roads and add houses, those houses soon form a village. You add some trees and details here and there, adjust some ground textures and you got one little places that already looks like something. So piece for piece you repeat those steps and at the end you get something like a nice forest map. When you are finally happy with your goal, optimization is the final part. You might have the prettiest map on the planet, but no one will play it if it runs like sh*t.

Mapping is a loooong process and it depends mostly from the size of the map, how detailed it should be and how much time you want to invest in learning more aspects of mapping. It can take you two months or ten months (like me for my map). Mappers in Squad not only want to show you a whole new place, we try at least to reach the same quality as OWI maps.

You are now developing a Sahel Desert map for French Mod. How did you join this collective and what are your motivations ?

By posting screenshots of my mapping process on the modding discord, Skor our ex-project manager approached me, if i’m interested in adding the French Armed Forces to my map and so i joined the team. First i was only helping with little parts on the map. Then after the SDK update, alot of stuff was broken and no one knew how to fix them. I started solving problems on my own map and then applying those solutions on the Douentza map. After finishing my own project, i became lead level designer for the French Mod. Soon i fell in love with the enviroment of Mali. It is an arid, but offers still so much variety. And no one tried to make an african map till now.

What can you tell us about this new map ? How is it progressing ? The community is probably waiting for it after all those screenshots published in previous WIP !

First of all, the map is huuuuuuge ! Its an 8×8 km map. There is a lot to add and to see. You start from an completely arid place mostly a desert and come to a more savanna style terrain with some dry grass and acacia trees. In between you got dry river beds, who only fill during the raining season. In the middle of the map we got the city of Douentza, where the name is directed from. We try to add malian-type buildings to give the player the best experience. For example in Mali a lot of villages are made of red loam and because the ground has that special color. The area we are trying to replicate, is sorrounded by huge red and black canyons (a bit like the grand canyon). We are currently working on a village south of the city, here we want to release our first playable area. Our 3D artist are working hard on creating more custom props for it.

The last word is for you Legion, do you have a sweet word for the Squad’s community and the French Mod team ?

I really hope to be able to meet the expecations of the players. We are all spending a lot of time after work or university to deliver the best experience to you guys out there. Im happy to be part of such a great community  and team!