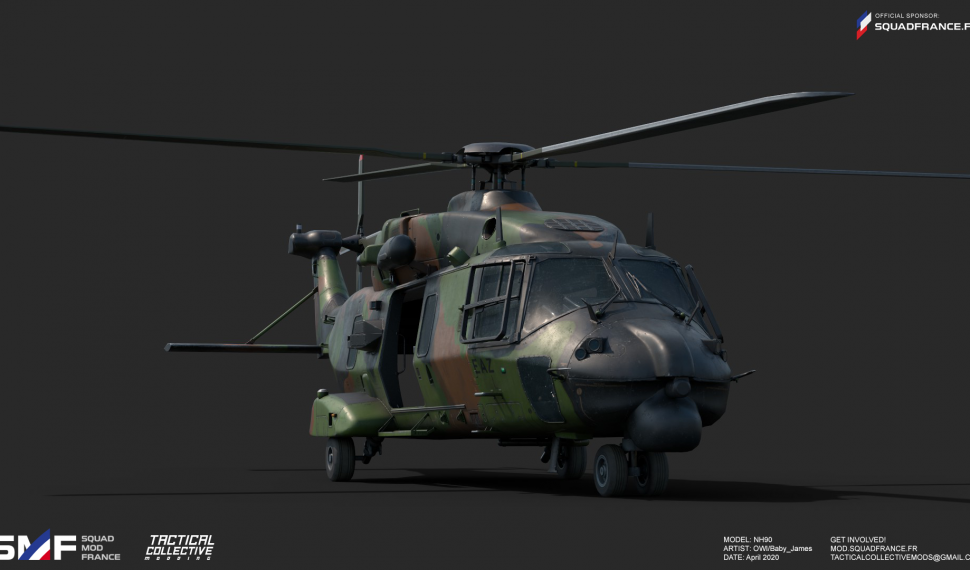 As you may have noticed, the team was on a break due to real-life reasons since the last WIP. After restructuring, the team grow up with new people, such as military advisors, a new artist and a new producer.

MADssense, the new Producer of the French Foreign Legion, made an amazing job to get the project back on track, and now works hard with the team to make it playable.

But we still don’t have enough 3D Artists & Animators. If you have this knowledges and want to help us in finishing the mod, feel free to introduce yourself on “#recruitment” channel on our Discord server.

With all of that said, here is what we have worked on during this last month.

First, we want to thank OWI for letting us use their NH-90 model. It’s a big help for us. We now have a beautiful French helicopter, through the nice retexturing of Baby_James.

Since the last time, we improved the number of details to increase the realism of the weapon (3D by Drakoliche) and textured it (Texture by DanielSMA).

We also are working on French vehicle. Some of it need improvement or rework, like the GBC 180 that you already saw and is rework by HCardioid. Work is in progress, and we will show you the final result on the next WIP.

A special reflection has been brought to the French map by the team, and especially by MaRqUiS ; leading a reorganisation of the map. Xander still work hard on it, and we will share you new visual on the next WIP.

At the same time, we are working on new assets for the map. For example, Titoonet works on a French church, who will be added to the map soon.

Here are some screens from the Malian map of Legion. He is currently polishing it to improve the performance and the gameplay.

We thank you all for the support. We know that the project has been here for a long time, but please consider that we are all doing this in our free time.

Our objective is to try to make the mod playable as soon as possible. Be sure we working hard for it!